Prof. dr. Dirk Ryckbosch, member of our group, gave a talk at Universiteit van Vlaanderen, an organization which provides free online colleges to the general public, given by prominent Flemish scientists. You can discover the talk here! (dutch-only)

On January 15 and 16, the Ghent Experimental Particle Physics Group has hold a group meeting and team building activity in Vecmont near La Roche-en-Ardenne. The main goal of the group meeting is to allow PhD students and research staff from our different subgroups to present their scientific work, to people outside their specific experiment. In addition to the scientific program, a team building afternoon was organized, such that new and older members of the group learn to know each other a little bit better.

As part of the Phase-2 upgrade program, CMS will extend its muon system by adding several new stations equipped with GEM detectors. About 30 of such GEM detectors have been assembled and certified in Ghent and were recently transported to CERN in order to prepare them for final installation inside the CMS detector later this year. 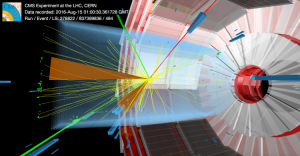 Three former students from the Ghent University went on to explore the South Pole. Read more about their stories here: